SAN FRANCISCO, CA – In a deep blue city within a deep blue state, are San Fransisco’s beleaguered law enforcers standing by while criminals ravage the streets? If so, is it a tactic to put pressure on a District Attorney who vowed to focus on complaints against the police rather than locking up criminals? Or is it a symptom of a loss of morale among the peacekeepers?

A Davis Vanguard article written by Darling Gonzalez, a junior at UCLA who is majoring in English and Political Science, cited a San Francisco Chronicle article by Heather Knight that stated:

“More S.F. residents share stories of police standing idly by as crimes unfold: ‘They didn’t want to be bothered.’ ”

A little on the city’s top law enforcer: He is the son of radicals, with radical ideals of his own. Boudin was raised by Weather Underground founder Bill Ayers and his wife after Boudin’s parents – Kathy Boudin and David Gilbert – were sent to prison for their roles in a murderous New York state bank heist in 1981.

The former deputy public defender campaigned on a platform of ending racial bias in the criminal justice system, overhauling the bail system, protecting immigrants from deportation and pursuing police with misconduct cases.

Boudin, who is facing a recall election June 7, was quoted in a 2019 article in The Guardian:

“Growing up in a household where people have a political consciousness, where people think and care deeply about political issues has an impact on you.” 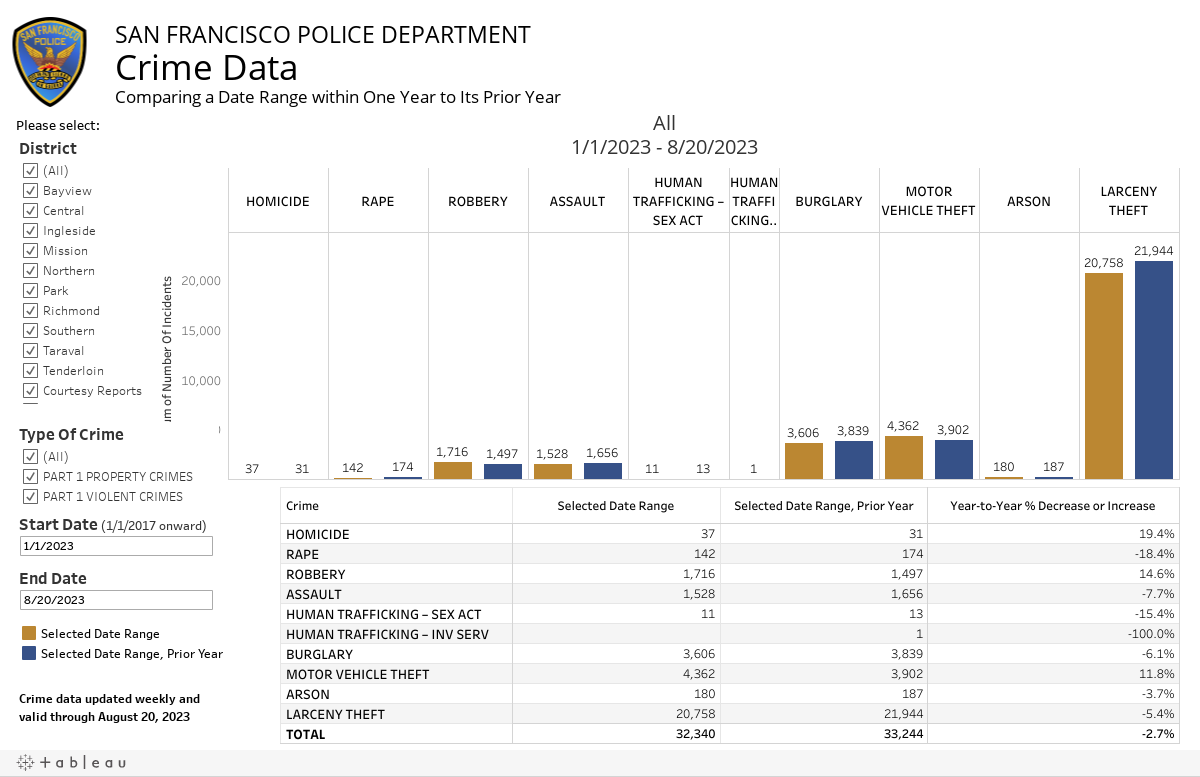 The Chronicle‘s Knight spoke with resident and business owner Danielle Kuzinich, who said officers with the SFPD witnessed but did not arrest a person vandalizing her parklet (a sidewalk extension that offers space for socializing) at the SF Wine Society. Knight wrote:

“Security camera footage from a business across the street [showed] the interaction between the cops and the man, who continued to tamper with the parklet after the officers departed, causing tens of thousands of dollars in damage and costing Kuzinich an estimated $40,000 in business as she repaired it.”

Jordan Staniscia’s e-bike was stolen, telling Knight that he did not receive any real help from police after tracking it via GPS, having video proof of the theft and showing police that his bike had been put up for sale by the burglars.

In response, Staniscia said police suggested that he could pose as a buyer and ask to meet in front of the Mission Police Station where police could come out to help. He said:

“I’m sitting there thinking, ‘Excuse me?’ This person could be armed. It seemed like a gamble to me and a dangerous one.”

When Staniscia’s bike was sold to a buyer in San Jose, Knight wrote, the San Jose police got it back to him within 45 minutes.

But police are frustrated by the lack of prosecutions and the lowering of crimes from felony status to misdemeanor. Some have said they don’t make arrests in certain cases because they know the district attorney won’t prosecute the suspect.

An example that has made national news is rampant retail theft. If police were to arrest a shoplifter, the suspect would be charged only with a misdemeanor if the amount stolen was less than $950. The suspect would be back on the street to steal again.

Walgreens, a frequent target, closed five of its Bay Area stores earlier this year because of massive losses due to shoplifting. Boudin said Walgreens’ problems have nothing to do with his policies and fell back on his upbringing to explain away lawlessness. He said:

“The reality is that’s a feature of modern American urban life, in large part because of the horrific wealth inequalities, the poverty, the lack of access to housing, the internet marketplaces where people can resell stolen products.”

Police Chief Bill Scott, who noted to Knight the good work being done by his officers, also acknowledged the problems of trying to hold back the criminal element in a city that is leftist by nature. She wrote:

“The department had ‘serious morale issues’ because of understaffing, intense scrutiny amid the police reform movement and tussles with District Attorney Chesa Boudin.”

In an interview Tuesday with the New York Times, Boudin doubled down on his refusal to prosecute more cases.

“We have to recognize that the tough-on-crime approach has had lots of opportunities to reduce recidivism rates, and it hasn’t worked.”

Boudin claimed that police are to blame for the city’s spike in crime for not making more arrests – despite his own record of charging suspects in only half of all theft cases in 2020, his first year in office.

However, one of his own prosecutors, who originally supported Boudin, recently quit and now supports the recall effort, which has 83,000 signatures.

Brooke Jenkins, a former homicide prosecutor, said she supports the recall because of what she called “mismanagement” and “low morale” caused by Boudin. She told the New York Times:

“It’s my perception that Chesa lacks a desire to actually and effectively prosecute crime, in any fashion. While he ran on a platform of being progressive and reform focused, his methodology to achieving that is simply to release individuals early or to offer very lenient plea deals.”

SAN FRANCISCO, CA – The San Francisco Police Department is ending its agreement with the San Francisco District Attorney’s Office that granted prosecutors authority to “independently” investigate police shootings, according to a statement released by the department on Thursday.

SF Police Chief Bill Scott is terminating an agreement between the police department and district attorney's office that allows the DA's office to investigate police shootings, in-custody deaths, and use of force incidents that result in serious injury. https://t.co/4sWXJhxeJb

Facing accusations that his office withheld evidence in the prosecution of a police officer, San Francisco’s progressive district attorney Chesa Boudin on Thursday blasted the police chief’s decision to stop cooperating with the DA’s office on use-of-force investigations:

“The whole reason for the signing of the (memorandum of understating) to begin with back in 2019 was to provide for our independent investigation of police officers.

“Walking away from the MOU means abandoning that commitment to justice.”

In a letter to the DA, San Francisco Police Chief Bill Scott said the rules of the MOU had been broken and therefore he was terminating the agreement. He also discussed the decision at a Police Commission meeting Wednesday night:

“Everybody who has anything to do with this MOU and the impacts of it all depend on this being a fair system that we all have confidence in. That’s what this is about.”

“Scott cited ‘serious concerns’ about recent court testimony by a DA’s Office investigator who said she was instructed to remove evidence from an arrest warrant for Terrance Stangel, an officer facing assault charges for beating a black man suspected of domestic violence in 2019.

“The investigator, Magen Hayashi, testified she was told to delete details about her interviews with two witnesses who said they saw the suspect, Dacari Spiers, assaulting a woman. Stangel’s attorney, Nicole Pifari, argued that evidence would have supported her client’s position that Spiers was dangerous, and her client’s use of force was justified.”

In Chief Scott’s letter dated February 2, he writes that the MOU was agreed to in July 2021 to allow the DA’s Office to take the lead in officer-involved shooting investigations, on-custody deaths, and use of force incidents that result in serious bodily injury.

“I have reviewed the court transcripts where the DA investigator provided testimony to the court, under oath, showing that the spirit and the letter of MOU processes and procedures we agreed upon have not been followed by the DA’s Office. Other evidence that was brought forward to the court corroborated the DA Investigator’s testimony as it related to violations of the MOU agreement.

“It appears that the DA’s Office has an ongoing practice of investigations against SFPD officers that includes withholding and concealing information and evidence the SFPD is entitled to have to further ancillary criminal investigations in accordance with the MOU.”

The Chief continued writing that the MOU was being terminated:

“This MOU was initially agreed upon with the intent that the public, the officers of the SFPD, and the SFDA’s office, have confidence in the provisions of the MOU and with intent that investigations are conducted justly, fairly, impartially, and in accordance with the MOU.

“Confidence has been eroded because of the concerns and MOU violations referenced in this correspondence. Therefore, and as set forth in the terms of the MOU, this is written notice of my intent to terminate the MOU after 15 days of delivery of this notice.”

Boudin called the Chief’s decision unacceptable, pointing out that the problems identified by Chief Scott in the letter had occurred before he took office in January 2020.

The DA also questioned the timing of the decision to end cooperation with his office, just as the first criminal trial against a San Francisco officer for on-duty conduct is getting underway. Opening arguments in the Stangel trial are set to begin Monday.

Please visit the attached link to learn more about the termination of the MOU ➡️ https://t.co/JSQMNO28VJ pic.twitter.com/dYVcBSOSYz

“It is no coincidence that it is in the middle of that trial that the department chooses to walk away from this MOU that has been working based on allegations that predate my administration.”

The DA said the Chief should meet with him to discuss the issue rather than walk away from the agreement.

Tony Montoya, president of San Francisco’s police union, agreed with the Chief’s decision to walk away from the agreement, saying the DA, who ran on a police accountability platform, could not be trusted to conduct an impartial investigation of officers:

“Implicit bias against police officers is rampant amongst the cadre of public defenders and criminal defense attorneys that Boudin recruited to his office.”