The recidivism rate of federal prison inmates hasn’t changed despite efforts to use graduated sanctions or other alternatives to incarceration.

Similar to findings in its previous studies, the Commission found age and Criminal History Category (CHC) were strongly associated with rearrests. Firearms offenses had the highest rearrest rates.

AMEN!!!! JFC- with all the “spikes” in crime, VIOLENT crime – all over the country- it’s time to crack down on criminals, felons and repeat offenders… “accountability” right?!?!? https://t.co/Tm2IPRRTSn

This study examined the recidivism of federal offenders released in 2010 during an eight-year follow-up period.

This consistency ensued despite two substantial changes in the federal sentencing landscape: the change from a mandatory to an advisory guideline system following Booker (editor’s note: the Supreme Court made a landmark decision in U.S. v. Booker, 125 S. Ct. 738 (2005), that mandatory Federal Sentencing Guidelines, as they had been applied since 1987, violated the Sixth Amendment right to trial by jury) “and” the increasing reliance on evidence-based practices in federal supervision (editor’s note: alternatives to incarceration).

Other recidivism patterns also were the same for the two offender cohorts.

Consistent with its prior reports, the Commission found that the combined factors of age and criminal history were strongly associated with recidivism.

Violent crime has been surging for months. Why has it taken this long? “Taking it seriously” requires taking action, like charging violent offenders vigorously and getting repeat offenders off the streets. That hasn’t happened in the 3+ years our leaders have been in office. https://t.co/cWV3EtyIzS

All offenders in the study aged 21 and younger in CHC IV through VI (editor’s note-CHI is based on dangerousness-applied via criminal history) were rearrested, compared to 9.4 percent of offenders aged 60 and older in CHC I.

The study also examined the relationships of other sentencing and offender characteristics that also were consistent with prior studies.

Placed in the context of massive recidivism and the criminal histories of prison inmates plus the negligible results of rehabilitation programs, Commission data is important from a public safety perspective.

Critics will point out that The US Sentencing Commission studied federal inmates. There are substantial differences between federal and state correctional systems with the Federal Bureau of Prisons holding a multitude of immigration and drug trafficking offenders and the states primarily holding violent offenders, Bureau of Justice Statistics.

Violent crime has been soaring in Houston. News kept covering it, but most were committed by repeat violent offenders released on bond. When people asked why lib judges weren’t being held accountable, they stopped covering it.

The bottom line is that The US Sentencing Commission has created a variety of reports correlating the relationship between criminal history and recidivism and now, with a previous study, we have a methodologically correct, large examination stating that longer periods of incarceration substantially reduce crime and recidivism.

The final study group of 32,135 offenders satisfied the following criteria: 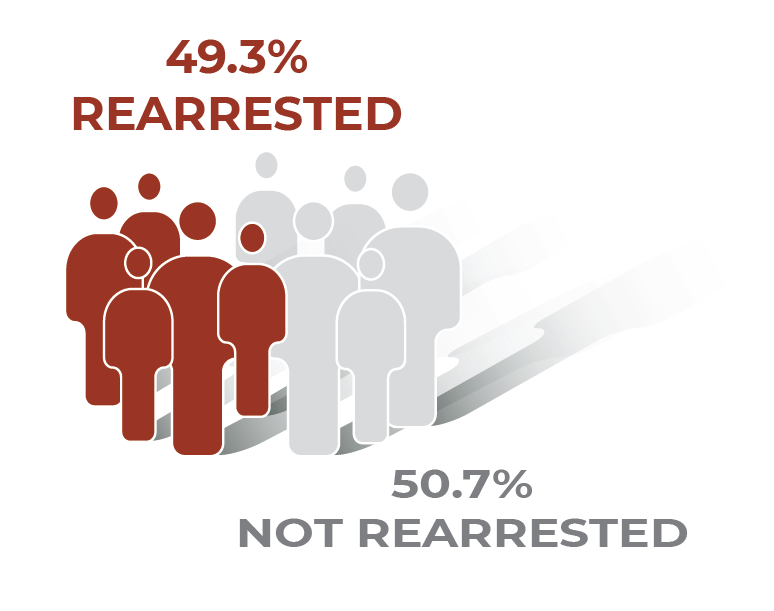 There are five primary reasons for the high rate of incarceration in the United States:

Recidivism is based on those released from prison who are arrested, convicted, or incarcerated again. The most common understanding of recidivism is based on state data from the US Department of Justice, Bureau of Justice Statistics, stating that two-thirds (68 percent) of prisoners released were arrested for a new crime within three years of release from prison, and three-quarters (77 percent) were arrested within five years.

At the most fundamental level, most people believe that public safety takes precedence. Most crimes are not reported to law enforcement, most reported crime does not end in arrest, and many arrests are not prosecuted. It’s obvious that the numbers cited above are undercounted.

Second, as to the impact of correctional rehabilitation programs, most do not reduce recidivism, and even when there are reductions, they are generally small, National Institute Of Justice.

The third reason for the lack of reform is the criminal histories of those in prison. The vast majority have multiple arrests and convictions, Criminal Histories. Most in state prisons are there for a violent crime.

Fourth, most believe that people in prison deserve to be there based on the serious nature of their crimes and criminal backgrounds. Fifty-six percent are “currently” there for a violent crime and if you take previous arrests and convictions into consideration, most have violent or serious criminal histories.

Finally, the overwhelming majority of state violations were for new crimes, not technical violations, as confirmed by the new report from the US Sentencing Commission, Technical Violations Not Connected To Recidivism.

Cops said that replacing them with social workers wouldn’t work. They were right – it’s a disaster.

KING COUNTY, WA– CrossCut is a Pacific Northwest media organization. They offered an article on the implementation of a social worker program created to respond to non-emergency 911 calls in King County.

As CrossCut stated, since the law took effect in August of 2021, many service providers are reporting a breakdown in managing people in severe crisis.

What was an already shaky response system has begun to crumble, they say, as law enforcement has pulled back from engaging.

In Seattle, police in August committed 45% fewer people to the hospital than was the norm during the previous four years — a trend that’s continuing into September, according to publicly available data from the police department.

Now, providers are ringing alarm bells. More than 20 King County service providers recently called for an “emergency summit” with city and county leaders, seeking clarity on what instructions those in law enforcement are receiving from police leadership, a legal analysis on the implications of the new state law, and a plan for creating more alternatives to police.

“Our community’s ability to adequately respond to behavioral health crisis events is itself in crisis…..”

“Without urgent action, people living with behavioral health conditions, the staff and organizations who care for them, and the community at large are at serious risk,”

Some social workers are saying their roles are too close to law enforcement and their profession needs to be rethought.https://t.co/EK0vmnfj2p pic.twitter.com/X7eZA3vl92

People with two kinds of jobs are authorized to detain someone to bring that person to the hospital: designated crisis responders and the police.

Designated crisis responders, however, are so backlogged that it can often take them a week or more to respond. Historically, that delay has left the police as service providers’ only backup option, for better or worse.

“It’s just a tragedy to not be able to get someone the treatment that they need,”

Over 200 officers have left the Seattle Police Department since the 2020 summer protests, including Carmen Best, the city’s first Black police chief.

As News Week states, officers have quit in protest as a result of the calls to “defund” the police, which includes cutting salaries and cutting jobs for as many as 100 police officers. Interim police Chief Adrian Diaz said the department’s reduced numbers have led to a “staffing crisis,”

As activists mobilized this summer to ask Minneapolis voters to replace their police department, one of the first prominent Democrats to slam the plan was a moderate congresswoman who doesn’t even live in the city.

“shortsighted, misguided and likely to harm the very communities that it seeks to protect.”

She then went on to warn that it could push out the city’s popular black police chief.

As a city that has become synonymous with police abuse wrestles with police reform, the effort is sharply dividing Democrats along ideological lines. The state’s best known progressives — U.S. Rep. Ilhan Omar and Attorney General Keith Ellison — support the plan, which would replace the police department with a new Department of Public Safety. Other top Democrats, including Sen. Amy Klobuchar and Gov. Tim Walz, oppose it, Associated Press.

So far this year, Minneapolis has recorded more than 500 gunshot wounds — roughly double the four-year average prior to 2020, Minnesota Reformer.

Replacing cops with social workers for non-emergency 911 calls is part of the plan.

Bureaucracies are pounded with criticisms but the funny thing about them is that they work.

Yep, their cumbersome and lack innovation. But complex social issues can only be addressed by rules, training, continuous funding sources, sufficient staff, and procedures.

Don’t want cops to respond to emergency social work calls? Then create and fund the bureaucracy (without dipping into police funs) that makes it work or you get a self-created “behavioral health crisis.”

The same will happen to Minneapolis and other cities as they contemplate “alternatives” to policing.

There are endless quotes on change management, “If you want to make enemies, try to change something,”–Woodrow Wilson.

But change cannot be done on the cheap. It has to be well thought out and supported or you get the current wave of explosive violent crime and crisis patients who need help with no one coming.

Police reform may be supported per Gallup, but making people’s lives demonstrably worse seems cruel and regressive to me.

Judge rules mayor, city council broke state law in defunding the police – fight begins to kick them out of office