For the purposes of this article, fragile, low-income and high-crime communities can be synonymous.

Gallup summarizes the challenges of policing in low-income neighborhoods. Residents understand that they need (and want) a greater police presence. At the same time, some have negative views regarding law enforcement contacts.

Low-income communities are traditionally associated (via Bureau of Justice Statistics data) with higher (or much higher) crime rates.  When media or politicians or residents demand lower rates of crime and violence, it often means concentrating police in high crime communities.

Proactive or aggressive policing lowers crime per the National Institute of Justice. But that means more police-citizen contacts that create tensions, Proactive Policing.

The demonstrations-protests-riots of the recent past created approximately two billion dollars (or more) in insurance claims. Protestors also sent a clear message that some citizens want dramatically less police contact. I doubt if that’s possible if crime reduction is the goal.

But for cities with protests, it’s a moot point considering that cops are leaving (per numerous media reports), recruitment is down 63 percent per the Police Executive Research Forum, and remaining cops refuse (or greatly limit) proactivity.

In the minds of officers, they are giving communities exactly what they asked for, CNN.

It needs to be understood that low income does not mean animosity or negative feelings towards law enforcement. There are thousands of low-income communities throughout the country (i.e., Applichaia) that rank law enforcement officers highly. Traditionally, stranger-to-stranger crime in these communities is low, so there is a limited need for proactive policing.

Most polling data indicates a relatively high level of approval or satisfaction with law enforcement. There may be differences in race or ethnic backgrounds but regardless, most (regardless of background) indicate a high level of support, Police Public Opinion.

74% of fragile-community residents vs. 87% of Americans overall think people like themselves are treated “very fairly” or “fairly” by their local police. The results vary by racial group: Black (65%) and Hispanic (72%) residents of fragile communities are less likely than white residents (87%) to say people like themselves are treated fairly by police, Police And Low Income Communities.

Reflecting widespread concern among Chicago residents about crime, 68% of adults living in Chicago’s low-income neighborhoods — called “fragile communities” in a new report from Gallup and the Center for Advancing Opportunity (CAO) — say they would like the police to spend more time than they currently do in their area.

That compares with 54% of fragile community residents nationwide who want a greater police presence where they live, and 29% of Americans overall. 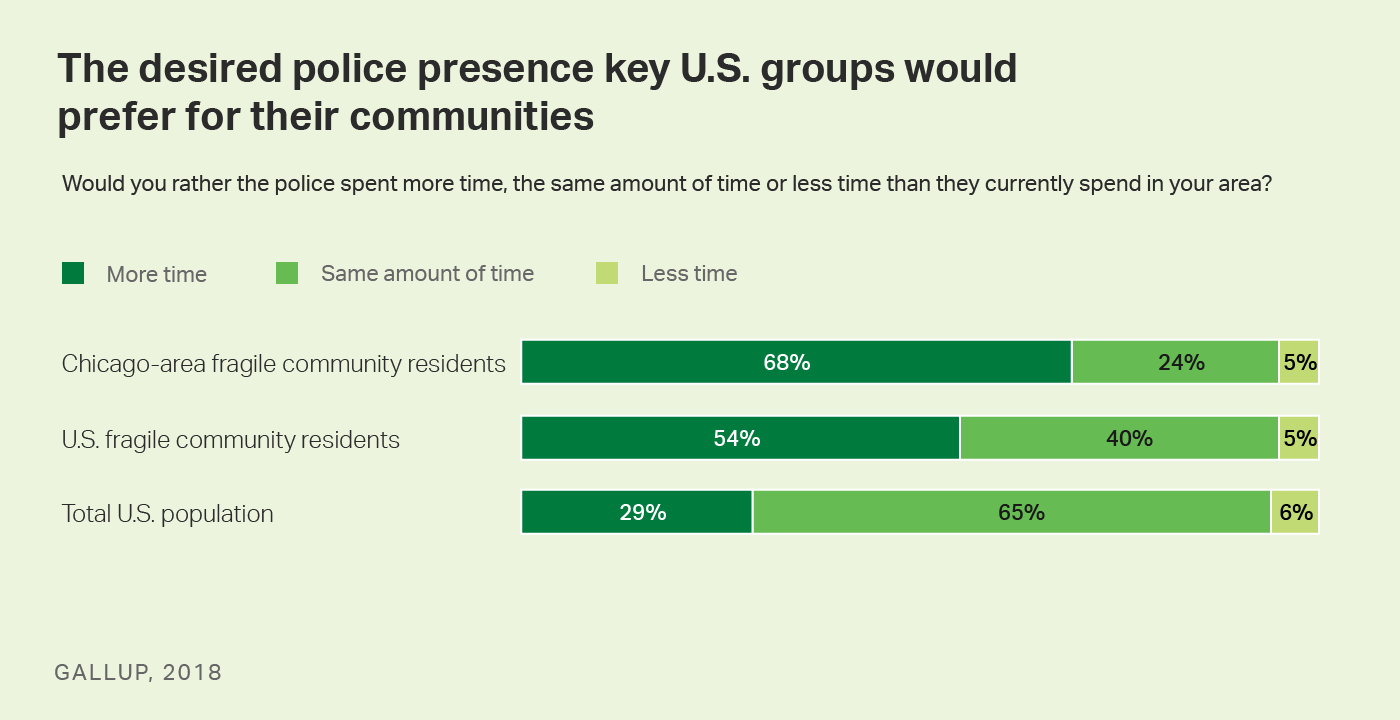 About half of Chicago’s fragile community residents (49%) say crime in their area has increased in recent years, while just 11% say it has decreased.

Perceptions of Police Treatment of Residents of Chicago’s Fragile Communities

At the same time that Chicago’s fragile communities need greater protection, these residents are also among the least trusting of their local police and criminal justice system of any fragile community in the country.

As stated, there’s no direct relationship between all low-income or fragile communities and animosity towards law enforcement. But decades of aggressive and proactive policing (initially supported by residents, community organizations, politicians, and the media) have left some feeling over-policed or disrespected.

The recent demonstrations-protests-riots have sent a clear message, stop aggressive police tactics. Cops have listened and the current conversation is about police officers doing routine patrols and responding to calls “but” not doing (or greatly limiting) proactive policing.

Violence has risen dramatically in cities throughout the country. Violent crime increased by 28 percent since 2015 per the Bureau of Justice Statistics. Serious violence has increased.

Fear of crime is at all-time highs. Firearm and security device sales are skyrocketing. People are leaving cities. The FBI’s latest report shows dramatic increases in homicides. Aggravated assaults and overall violent crimes are up, US Crime Rates.

Cops are reacting to the negative publicity and wildly conflicting priorities by leaving the job. Police recruitment is down dramatically. Response time in some cities is increasing dramatically. Some cities (i.e., Minneapolis) don’t have enough officers and are relying on other jurisdictions.

It seems that we are at an impasse as to policing “some” low-income communities. Residents want and need a greater police presence but they reject widespread proactive policing. Pre the data, there are no reasonable substitutes. There is limited to no research indicating that social programs reduce violent crime.

The challenge of our time is addressing violent crime in a way that high-crime residents support. To my knowledge, that remains tragically elusive.

My book based on thirty-five years of criminal justice public relations,” Success With The Media: Everything You Need To Survive Reporters and Your Organization” available at Amazon and additional booksellers.