Skip to content
Trending:
Portland rioters now calling for the murder of cops in the name of justice: 'Kill a cop, save a life.'
We agree with Judge Jeanine - Less than 80 days to decide if you want freedom to go to the gym, church or a restaurant
9/11 memorial ceremony cancelled by the mayor who was caught passed out drunk, minus pants, in his employee's bed (op-ed) Portland rioters now calling for the murder of cops in the name of justice: 'Kill a cop, save a life.'

PORTLAND, OR- For almost three straight months, the city of Portland has been under siege by members of Antifa and Black Lives Matter.

The groups have literally attacked businesses, residences, and police officers every night since May.  These attacks started, supposedly, after the death of George Floyd while in police custody in May of the year, however, since then, they have now begun to call for the death of police.

On August 15th, members of Antifa and other rioters attacked Portland Police officers for over 80 consecutive nights.  These cowards destroyed property (as they have every night), and used weapons on the officers trying to maintain the peace and protect property.

According to the Portland Police, hundreds of rioters marched toward the Penumbra Kelly Building, which contains the Multnomah County Sheriff’s Office and the Portland Police Bureau.  This building is surrounded by a large residential area, which has not deterred members of the mob before.

According to the Daily Wire, the rioters began chanting, “Kill a cop, save a life,” “What do we want?  Justice!  When do we want it?  Now!  If we don’t get it, burn it down!”  It is not clear what justice they are calling for when they are also calling for death and destruction.

Portland Police said that the incident started as a large gathering of rioters showed up at the Laurelhurst Park.  Starting around 9pm, the mob, estimated to be in the hundreds, began walking and blocking the streets from vehicular traffic, and marched to the Penumbra Kelly Building.

Portland police began giving loudspeaker announcements to the mob, warning them not to engage in violence or commit any crimes.  As usual, the warnings came with the announcement that those who ignore the lawful order could be subjected to “arrest or force, including crowd control munitions, pepper spray and tear gas.”

As usual, all lawful commands were ignored, and the crowd took up with their chants to kill cops in what they believe was a call for justice.  Their ultimatum given, if they did not get what they wanted, they will burn the city down.

After 11pm, Portland officers began reporting that members of the mob were launching:

“mortars at the police and cars well back in the Penumbra Kelly Building parking lot, followed by thrown objects.”

Members of the mob began entering the property, and they were warned to stop trespassing, as the area was closed to the public.  Attacks were also made on a person who was driving in the area who lost control and crashed.

For some reason, the mob believes that he was trying to hurt one of their fellow rioters.  The man, who offers no resistance to the rioters, is beaten severely and then finally kicked in the head by a ‘man’ wearing a vest which says security.

.@TPostMillennial is reporting that the BLM "security" filmed beating the Portland driver unconscious is Marquise "Keese" Lee Love. He has not been accused or charged by police.

Love has a criminal history that includes charges of domestic violence. #BLMhttps://t.co/SxlZAIpRFy

The mob, not liking being told what to do, began throwing large river rocks at police officers.  Several more warnings were given to stop the attacks on the police, all were ignored.  At almost midnight, the crowd of cowards began throwing “rocks, frozen eggs, glass bottles, and frozen water bottles” at the officers.

This is what antifa do to people they encounter in the street. Watch them assault and hit a man walking away from the antifa riot in SE Portland. They bring bats precisely for this purpose. #PortlandRiots #antifa Video by @VenturaReport. pic.twitter.com/AfxmVHHk6K

In addition, officers reported having green lasers pointed at them, and members of the crowd spray painting the surveillance cameras on the buildings.  The Portland Police gave several more warnings, and then declared a riot.

After declaring a riot, police warned the crowd to leave or face repercussions, and began to move the crowd westward.  The crowd continued attacking the officers by striking them with rocks and other objects, but the police still advanced.

Once the crowd was pushed away, officers returned to their perimeter around the Penumbra Kelly Building. 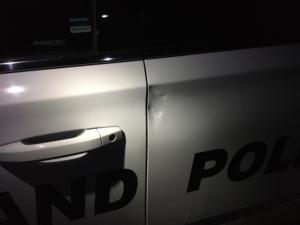 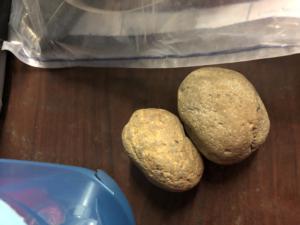 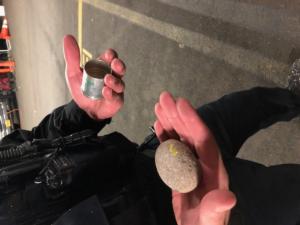 The mob returned to the Penumbra Kelly building around 12:30am, and again began blocking the streets in the area.  They started attacking the police officers again and the Portland Police moved back in to disperse the crowd, making arrests along the way.

The crowd began to slowly dissipate, and the riot ended after 2am.  Portland announced the following upstanding people were arrested for various crimes:

“At the time of this release, over 60 calls for police service were holding around the city.  Some had been holding for the length of the events described here.  Call types ranged from theft, vandalism, suspicious activity, hazards, hit and run, burglary, violation of restraining order, alarms, stolen cars, harassment, and many others.”

Portland Police also reported that at least two of their officers were hospitalized after being struck with a ten pound rock.

CNN reports that that rock that was thrown, weighing a total of 9.5 pounds, was thrown by a member of the mob who was wearing clothing which had “press” written on it.

In other words, the lawless acts of those people who want anarchy, seemingly get their wish every night these riots go on.  Lawlessness reigns because the police are tied up getting these crybabies corralled every night that they cannot respond to normal calls for service.

9/11 memorial ceremony cancelled by the mayor who was caught passed out drunk, minus pants, in his employee’s bed (op-ed)