PURCELLVILLE, VA. – Let’s remember this…these idiots are going to be running the country in twenty years.

In yet another episode of brain-dead teenagers with too few brain cells and too much time on their hands, we now have a trend of going to grocery stores and coughing on produce, then posting their “pranks” online.

This, as we are in the middle of a pandemic known to spread from “droplets” coming from people’s mouths.

First, we had the Tide Pods.

Then we had the “Kiki challenge” where morons would get out of moving cars and dance alongside, until a few actually got their asses run over.

More recently, we the “hot water challenge” where people (usually teens) would throw boiling water at their alleged friends.

Then it was the “skull breaker challenge” where two people stand alongside someone, who jumps up in the air, and the two standing alongside kick their feet out from under them. All fun and games until someone gets a fractured skull or severe concussion.

Police in Purcellville, VA., located about 55 miles from Washington, D.C. are warning of a “disturbing trend” after teens were caught on camera coughing on produce at a grocery store, then posting it on social media. Pure genius right there.

While we are in the middle of a pandemic that has pretty much brought the country, if not much of the world to a standstill, there are actually teenagers out there who think this is amusing.

“We have learned that this appears to be a disturbing trend on social media across the country, and we ask for help from parents to discourage this behavior immediately,” Purcellville police said in a Facebook post on Thursday.

“We are asking for parental assistance in monitoring your teenagers’ activities, as well as their social media posts to avoid the increase of any further such incidents.”

There were no specific incidents detailed to the police department, however the police asked parents to “talk with your children and explain to them why such behavior is wrong.”

Let’s see, if you are a teenager, you should be old enough to understand that coughing on food under normal circumstances is wrong. My three-year-old granddaughter knows better than that.

A community Facebook page had a post from a woman who witnessed the brain-dead teens and their ridiculous stunt:

“Punk teenagers are hitting the grocery stores, coughing all over the produce and grocery items—filming in and posting it to YouTube. It scared the hell out of one elderly woman who was just trying to grocery shop. Why the hell aren’t these people keeping their teens home??? This is not summer vacay!”

Police did not identify the specific grocery store, however management at the store removed the tainted fruits and vegetables, law enforcement authorities said.

Police have not made any arrests in the incidents.

Meanwhile, some other teenagers also have too much time on their hands, as we recently reported.

Plymouth, Massachusetts – After spending over a week trying to identify a suspected vandal, police have announced the arrest of a teenage suspect they believe to be responsible for defacing Plymouth Rock earlier this month.

The timing is probably not coincidental.  Plymouth is commemorating the 400th anniversary of the Mayflower landing this year.

Police say a 17-year-old boy is responsible for spraying red paint all over Plymouth Rock and several other sites in the historic Massachusetts community. https://www.newscentermaine.com/article/news/crime/police-teen-faces-charges-in-vandalism-on-plymouth-rock/97-582da71e-8c83-4181-b43c-8b4e01a40636 …

The rock symbolizes the spot where the Mayflower Pilgrims disembarked in December 1620.

On February 17th, the famous rock with the year “1620” chiseled into the stone was spray painted with the caption “508 MOF”.

Several other landmarks nearby the rock, such as the Pilgrim Maiden and Four Fathers Monument, were also tainted with the same red spray paint.

Police noted that in total, there were 11 locations that were the subject of said vandalism.

On Thursday, February 27th, police stated that they had a suspect in custody that they allege to be the sole person responsible for all the graffiti. Authorities only identified the suspect as a 17-year-old male resident of Plymouth.

Police stated that he’s been charged with one count of trespassing and 11 counts of vandalism to property.

Chief Botieri has put out the following Press Release regarding the charges against the male responsible for the recent vandalism around Plymouth and historical monuments: 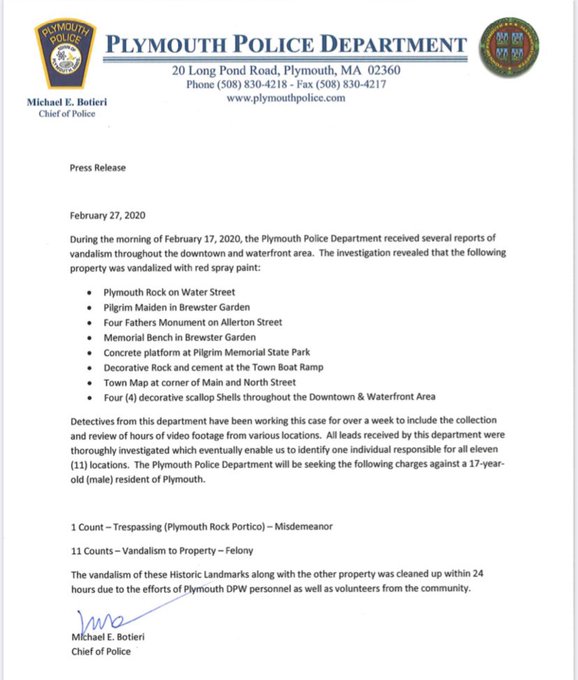 Investigators had identified the suspect after reviewing surveillance footage from several locations near and around the vandalized landmarks. Police had commented on the clean-up efforts of the crime, saying:

“The vandalism of these Historic Landmarks along with the other property was cleaned up within 24 hours due to the efforts of Plymouth DPW personnel, as well as volunteers from the community.”

Most, if not all, the vandalized landmarks and displays had the “508 MOF” tagging painted on them. While there’s been little explanation to what this means, it’s possible that it’s some kind of reference to a neighborhood clique or gang.

“508” happens to be an area code established that covers portions of Plymouth.

Very disrespectful and disturbing for America’s Hometown! Thanks to our DPW crews for their quick response and a resident (Jake Mowles) who has volunteered to help out! Jake owns Eastcoast power washing. There are still wonderful people in our community! Shame on you 508MOF! 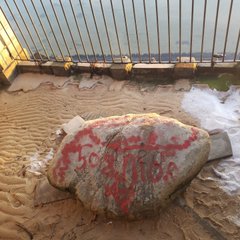 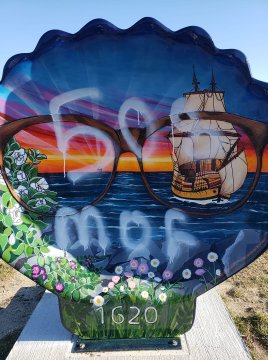 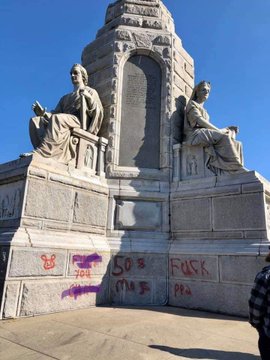 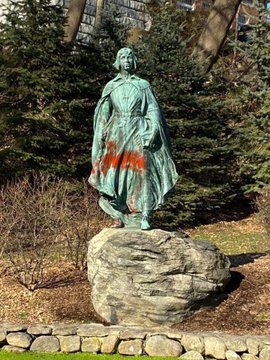 Hard Factor Wes, of Barstool Sports fame, had some funny words for those repping “508 MOF”:

“508 MOF gang is the softest gang in the world.  Good luck protecting your turf with the street cred you gained by spraying a famous rock, what’s next for them, they gonna graffiti The Liberty Bell?”

So, what could be in store for the alleged juvenile vandal?

Turns out that Massachusetts has some stiff penalties for vandalism in their state.

If convicted of all counts of the vandalism charged, the minor could face up to three years in prison for every count and a fine assessed at three-times the value of every defaced item and monument.

It would be hard to determine the value of such monuments that were spray painted, but this 17-year-old won’t be thinking his shenanigans was that funny when reviewing the potential sentence he could face if convicted.

What police have not yet revealed is if this teen was also responsible for vandalizing a 9/11 memorial in Plymouth.

Earlier this week, we reported the details of that destruction:

“At first I was angry, then I’m heartbroken. It’s just sad. People don’t know that families come here. I’ve met people from all over the country that come here.”

This morning, a contingent of over 25 Plymouth Fire Local 1768 members were on scene to repair our 9/11 memorial that was desecrated by vandals. They can knock us down, but we will always get back up even stronger. We are firefighters. We never forget. 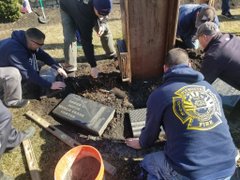 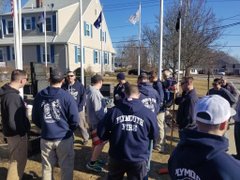 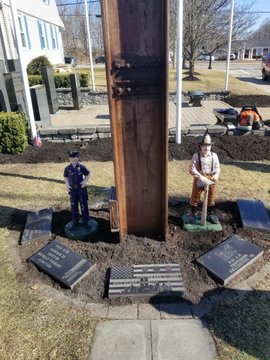