I just offered an article on the latest data from the Bureau of Justice Statistics of the US Department of Justice in August 2021 regarding a five-year follow-up of people released from prison, see USDOJ-Recidivism-Five Year Follow Up.

During the five-year follow-up period, an estimated 1.1 million arrests occurred among the approximately 408,300 prisoners released in 2012.

This article summarizes the latest Bureau Of Justice Statistics report regarding ten years after release.

Among persons released from state prisons in 2008 across 24 states, 82% were arrested at least once during the 10 years following release.

This is BJS’s first recidivism study with a 10-year follow-up period.

Most police chiefs are blaming increased crime on repeat offenders. Based on this and other data, they are correct.

Prisoners released in 2008 had a median of nine prior arrests and five prior convictions in their criminal history.

About 61% of prisoners released in 2008 returned to prison within 10 years for a parole or probation violation or a new sentence.

During the study’s 10-year follow-up period, an estimated 2.2 million arrests occurred among the approximately 409,300 persons released from prison across 24 states in 2008. Considering that most violent and property crimes are not reported to law enforcement, this figure is an undercount.

Sixteen percent were arrested within 10 years outside of the state that released them.

During this period, 4 in 10 (40%) persons released from prison in 2008 were arrested for a violent offense.

Among persons released from prison in 2008 in the 18 states with data on persons returned to prison, about half (49%) had a parole or probation violation or an arrest that led to a new sentence within 3 years, a rate that increased to about 6 in 10 (61%) within 10 years. 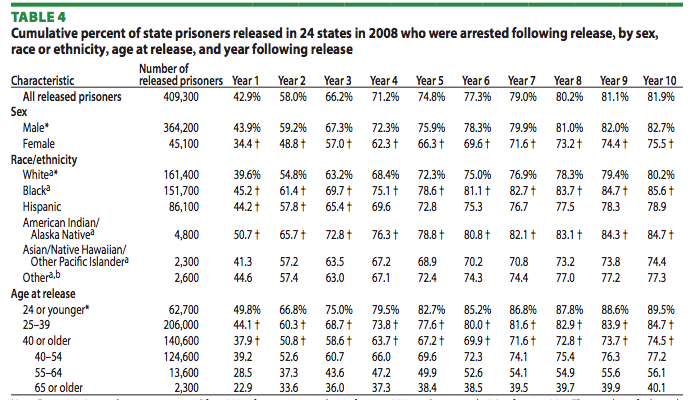 As I stated in previous articles, I personally know or have interviewed (for radio and television shows) hundreds of former inmates who are now law-abiding citizens doing well in the community. They deserve our respect.

Regardless of the numbers above we can’t stereotype every released offender. We need to support programs for those in and out of prison (although the data on the effectiveness of programs is mostly dismal).

But we live in a time of rising violence, US Crime Rates, and most police chiefs are blaming repeat offenders. Based on this and other data, they are correct.

Not everyone convicted of a crime needs to go to prison, but violent offenders, currently 58 percent of the male state prison population (the percentage would be much higher when considering criminal history) need to be separated from society for probably longer than the less than three years they are currently serving.

Got him: Suspect arrested in murder of police officer who responded to a domestic disturbance

CLIFTON, TN – According to reports, authorities arrested a 48-year-old man under charges of first-degree murder regarding the fatal shooting of a Hardin County deputy who was among other local law enforcement who responded to a domestic disturbance report on September 25th.

The incident began after Hardin County deputies and Clifton Police responded to a residence located off of Nance Bend Road in Clifton for a reported domestic disturbance at approximately 8:30 p.m. on September 25th.

Upon the arrival of officers, officials say they encountered 48-year-old Todd Stricklin, who was reportedly armed with a firearm during the initial confrontation. Officers on scene told the suspect to drop the weapon, but Stricklin reportedly refused to do so.

During the confrontation with the suspect, authorities say Hardin County Deputy Matthew Locke approached the residence to assist with the incident and was shot by Stricklin.

Deputy Locke was rushed to an area hospital after the shooting, where he later passed away from his sustained injuries, according to a statement provided by Hardin County Sheriff Johnny Alexander:

“Hardin County Sheriff Deputy Matthew Locke was assisting another deputy regarding a domestic disturbance call when he was senselessly fired upon. Deputy Locke ultimately succumbed to the injuries he tragically sustained while serving and protecting his community with honor and distinction.”

Following the shooting, authorities say that Stricklin fled into a wooded area nearby his residence, where Tennessee Highway Patrol officers located him a few hours after the incident.

Stricklin was booked into the Hardin County Jail under a charge of first-degree murder before being later transferred over to the Chester County Jail.

It is with the deepest sadness I report the murder of another officer. Deputy Locke was shot & killed while responding to a domestic dispute
Our Thoughts & prayers go out to the family & friends pic.twitter.com/ZdjkiAGf2b

Outside of having served with the sheriff’s department, Deputy Locke was also a member of the Tennessee National Guard. Sheriff Alexander said the country had “lost a hero” with the passing of the deputy:

“Our country has lost a hero. Our department has lost a brother. We will never forget Deputy Locke, and we are all forever in debt for his sacrifice.

On behalf of myself and everyone with the Hardin County Sheriff’s Department, we express our deepest condolences to members of Deputy Locke’s family, his friends and loved ones.

I also want to express my support, care and concern for all members of the Hardin County Sheriff’s Department, the City of Savannah Police Department and our surrounding colleagues from other departments as you are unfairly forced to mourn this tragic loss.”

Hardin County Mayor Kevin Davis also released a statement regarding Deputy Locke’s death, calling the receipt of the news as being “one of the hardest calls” he’s ever had to take during his time as mayor:

“Last night, I was informed Hardin County Deputy Matthew Locke lost his life while assisting another deputy during a domestic disturbance call. Without a doubt, this was one of the hardest calls I’ve received during my service as Hardin County Mayor.

Deputy Locke was a deputy and soldier who served his community and his country with honor, courage, commitment, dedication, and devotion. Deputy Locke was known to be a fearless warrior with a servant’s heart. Our community has lost a hero, and a family will never be the same, all because of this senseless tragedy.”

District Attorney Matthew Stowe stated that he “activated the death penalty team” regarding the case against Stricklin, saying that his office “will not allow murder to go unpunished”:

“Upon learning the details of the shooting, I have activated the death penalty team who will be reviewing the evidence and charges to determine if this shooting of a law enforcement officer meets the standard for a capital murder crime.

We will not allow murder to go unpunished in the 24th Judicial District. While other parts of the country struggle with unlawfulness and activists who encourage violence against police, the people of our West Tennessee district stand firm in support for our officers and the rule of law.”

They defunded the police. Now FBI data shows a significant increase in murders nationally in 2020.