HOUSTON, TX- Houston police are searching for 6 suspects who committed a home invasion robbery in mid-January.  The men pretended to be police officers as they pounded on an apartment door around 12:30am on January 17th.  When no one answered, they kicked down the door.

Police have released surveillance footage of the men and are asking for the public’s help to identify and bring them into custody.  Several of the men can be seen wearing hoodies and masks and holding firearms. 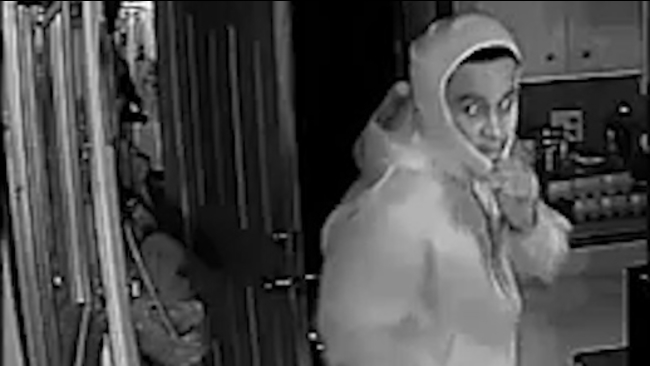 The men broke into 2 separate apartments, which happened to both be occupied by family members.  The first apartment of a woman who lived there with her mother, stepfather, and siblings.  Her mother wasn’t home, but the woman called her mom and said:

The men demanded money and valuables, which the residents handed over.  The robbers didn’t believe the family gave them enough, so they took the stepfather and demanded he knock on the neighbor’s door.

The neighbor happened to be the woman from the first apartment’s uncle.  Once inside, the men also demanded money and valuables from that family as well.

At some point, one of the suspects pistol-whipped the stepfather.

Another suspect pulled a sleeping 5-year old child out of her bed.  He held a gun to her head and demanded the hand over more valuables, saying he would shoot the little girl if they didn’t.

Once sirens could be heard in the area, the suspects got into their waiting vehicles and fled the scene.  Police observed them fleeing and set up containment in the area but were unable to locate any of them.

While surveillance video has been released, no suspects had been identified at the time of this writing.

It’s unknown if the crime was random or if the house was targeted.  Houston Crime Stoppers is offering reward money for tips leading to the suspects’ arrests.

Houston has experienced several home invasion robberies in the last couple of months.

Late Monday night of this week, a pregnant woman showed up at a Houston hospital suffering from multiple gunshot wounds.  Unfortunately, the woman, as well as the man who drove her to the hospital, aren’t cooperating with police to determine exactly what occurred.

Based on evidence at the scene and the limited witness statements they’ve obtained, police have said they believe the incident was a home invasion robbery.

A search of the victim’s home revealed shell casings, drug paraphernalia, and a trail of blood from the main home to a vacant home behind that one, which is where the shooting is said to have occurred.  The uncooperative and unnamed woman as well as the baby are listed in stable condition.

On New Year’s Eve, a father of two young children was killed in his home during a robbery.

In that instance, 2 masked men broke into an apartment where Tre Cain was with his girlfriend and their 2 children, aged 1 and 4.

The men shot and killed the father and then demanded the girlfriend hand over money.

The suspects in that case were also not located.  Police believe that was a targeted incident, although they don’t know why it occurred.

Authorities are searching for multiple suspects after a man says three people tried to rob him Tuesday night in southeast Houston.​ https://t.co/NtrH0xKoBA

Another incident occurred near Houston in December where 4 masked men entered a mobile home in an apparent attempt to burglarize the house.  At least one suspect was carrying a handgun.

Unfortunately for those men, the homeowner chose to exercise his Second Amendment rights.  He came out of a bedroom with his shotgun and shot at the suspects, killing 3 of them.

The resident was shot once during the incident but was treated at the hospital and released.

Also in December, a husband, wife, and daughter were also held at gunpoint during a home invasion robbery.  The suspects, 4 masked gunmen, locked the mother and daughter in a bathroom while they beat the husband.

No suspects have been taken into custody for this incident.

Why is this kind of violent crime running rampant in the City of Houston?

Kim Ogg ran for DA on a platform of criminal justice reform.  That reform, apparently, was to almost completely halt the criminal justice system and attempt to keep criminals out of jail as much as possible.

Fraternal Order of Police National Vice President, and President of the Houston Police Officers Union President, Joe Gamaldi wrote an article for the Houston Courant articulating just how messed up the system is under Ogg.  In it, Gamaldi said:

“When you have violent, true habitual offenders, you should only be discussing how long they will go to prison, not negotiating to let them off the hook completely. Is anyone asking the victim how they feel about these deals?

Does anyone care about justice for victims? Our current elected DA is so worried about going light on criminals, she has completely forgotten that it is her duty to protect and represent victims!”

Like many other big cities (San Francisco, New York, Philadelphia…) elected persons are more concerned with criminal “rights” than they are in obtaining justice for victims of violent crimes.

Until that changes, crime rates will only continue to rise.

How many more people have to get robbed, shot, raped, murdered, before people in those cities wake up and demand ACTUAL justice?

Thanks to ‘bail reform’, this suspect keeps being released. Now a woman says he tried to rape her.

Pro-gun group warns police: Violate the 2A rights of law-abiding citizens and we’ll sue you.