BEND, OR – The Thin Blue Line, the symbol that represents on one side civility, the bottom side chaos, and the police in the middle, has somehow become, to some, a symbol of hate and terrorism.

Now, the Bend Police Department, in Oregon, has bowed to the pressure and has decided to remove the symbol from their marked police cars.

This is a bilingual message / Este es un mensaje bilingüe.Our patrol vehicles are currently getting a makeover, by…

Posted by City of Bend Police Department on Wednesday, September 23, 2020

The Bend Police Department released the following from the Facebook page to explain:

“Our patrol vehicles are currently getting a makeover, by removing the blue line graphic on them. The “thin blue line” has meant many things over the decades.

“The divisive use of the thin blue line symbol to fit a narrative unassociated with our department or what we stand for, has unintentionally created an ongoing divide between some members of our community and the police officers who serve them.

“In the spirit of mending divide, being inclusive with the community we serve, and to continue to build trust within our entire community, our current and future vehicle graphics package will no longer contain a blue line.

“Moving forward, we will be looking for a design that incorporates a way to honor members of our first responder family who have given their life in service of their communities. Our goal is to have a symbol created that blends seamlessly with our existing mountain graphics.”

Bend Police Chief Mike Krantz told KTVZ that they removed the honored police symbol to try to cater, sorry, not his words, to bring down the walls between law enforcement and citizens.

“The intent of the blue line with the black background is, of course, for current law enforcement is the memorial, the ultimate sacrifice of giving your life and service of your community.

“Some community members view it as an important piece on our cars, others view it as a barrier between the police and the community, so it’s my role to evaluate that and look at how we can best serve the entire community.”

Only two residents chimed in on the removal of the police symbol, that has been in existence long before these protests and riots.  The meaning of the symbol has never changed, not from a police standpoint.  But criminals, rioters, and protesters that errantly believe there is an epidemic of police hunting and killing minorities have twisted the Thin Blue Line symbol to fit their narrative and equate it with terror.

People like Bend resident Alex Burnett, who thinks that the move by the police chief was a good one.

“I think it is a step forward, and it’s putting this conversation in the spotlight, which is a good move.  But I’d be interested to see what they actually have to say about it, because actions speak louder than words – but at this point this is just words.”

“Removing themselves from that symbol, to me, shows they’re not wanting to make it an ‘us and them.’  Even if the symbol has been around longer than these protests have gone on, I think it’s been picked up by people for a different reason, and that seems like why they would take it away.  Because it no longer stands for what it used to.”

However, for the seemingly few that are in support of this move, there appears to be many that are dead set against it, at least after reviewing Bend’s Facebook comments.  One apparent resident, Marah Troullier, commented:

“Whose (final) decision was this?  Unbelievable disappointment – creating hysteria in 2020 is rampant, the history of courage and community support for the thin blue line should never be under attack…

“[T]o submit to such a request is not only a waste of money, it really send the wrong message to the community.  Thank God we still have a Sheriff in town.”

“I never though in my lifetime the great city of Bend, Oregon would cave to the Woke Progressive Ridiculousness that has overtaken Portland.  Way to turn your back on your fellow officers Chief!  Too bad you’re not a Sheriff, that way you could be voted out of a job.”

In another example of political correctness gone awry, a Mayor in New Jersey ordered thin blue line masks be removed.

FAIR LAWN, NJ– In yet another example of “I will play so I can be re-elected”, Fair Lawn, NJ Mayor Kurt Peluso ordered Fair Lawn Police Officers to take off their thin blue line face masks during the 9/11 memorial ceremony. 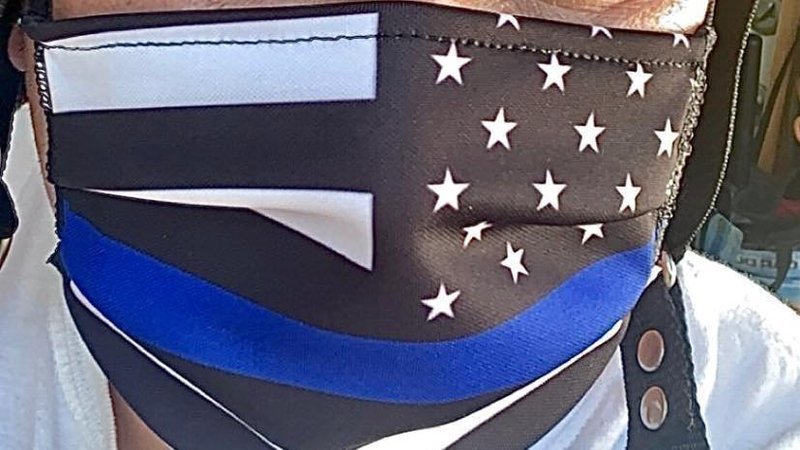 Many view the thin blue line as a symbol of honor and respect, so it is only fitting that Fair Lawn officers wanted to showcase that honor on their face masks, at no better place then a memorial honoring the 60 officers, 343 fire fighters and 2,977 civilians that died that horrific day.

@benshapiro @seanhannity @realDonaldTrump in Fair Lawn, NJ, police were ordered to remove their thin blue line masks by the mayor and council during the towns 9/11 ceremony stating it was political. https://t.co/WH486MWnRh

Mayor Peluso however disagreed. The Mayor ordered the officers to remove their thin blue line masks, and instead don plain black or white ones (as seen below), stating: In response, the Fair Lawn PBA Local 67 released a statement saying in part:

…The Thin Blue Line is a tribute to all fallen police officers including those lose on 9-11. To interpret it otherwise would be hollow hearted. This is where we stand.” There is now a petition circulating asking people to as a show of support for the officers, and to denounce the actions of the mayor. The petition website reads:

“We the undersigned of this petition denounce the actions of Fair Lawn, NJ Mayor Kurt Peluso’s ordering of members of the Fair Lawn Police Department to remove face masks honoring those officers who have made the ultimate sacrifice in the line of duty, the Thin Blue Line American Flag.

Mayor Peluso’s actions politicized a day in which we remember those that perished in the terror attacks of 9/11.

In addition to Mayor Peluso’s actions, there was no prayer or benediction, the ceremony lasted merely 13 minutes, and none of the council members spoke.

Only one of the family members of those we lost on that tragic day were in attendance possibly because the ceremony was thrown together last minute after public outcry on social media 48 hours prior to September 11th.

For a ceremony that was allegedly planned in advance, this was a rather sad tribute to those we lost.

Please sign below to show your support for our brave men and women who selflessly serve the great Borough of Fair Lawn, NJ.

They do so despite the actions of the Mayor and council who have clearly shown they stand on the side of the Black Lives Matter activists chanting “all cops are bastards” as well as those who hate and vilify police.”

The brave men and women who protect and serve Fair Lawn, NJ were recently asked to remove their Thin Blue Line American Flag masks during the town’s 9/11 ceremony!!https://t.co/sLtKo11yjG

Mayor Peluso has yet to explain his rational for thinking it was a good idea to order officers to remove their representation of honor and respect for all officers both living and deceased on September 11th, other than the obvious reason of safe guarding his political reputation.