WASHINGTON D.C.– The FBI released “final” crime data for 2020 on September 27, 2021, based on crimes reported to law enforcement agencies.

The data shows that the number of homicides increased nearly 30% from 2019, the largest single-year increase the agency has recorded since it began tracking these crimes in the 1960s.

The estimated number of aggravated assault offenses rose 12.1 percent, and the volume of murder and nonnegligent manslaughter offenses increased 29.4 percent.

Readers need to understand that only 41 percent of violent crimes in the US are reported to law enforcement.

Counting Crime in The US Is Complex

I wished there was a simpler explanation regarding crime increases in the United States. Yes, counting crimes is getting very complex.

First, there are two principal data sources for measuring US crime, the FBI based on crimes reported to law enforcement and the Bureau of Justice Statistics National Crime Victimization Survey.

Only 41 percent of violent crimes are reported to law enforcement, thus the need for a national survey to collect data on all crime.

The new data format from The FBI’s Crime Data Explorer leaves you very confused. The older Summary Reporting System was much simpler.

The FBI’s National Incident Based Reporting System (NIBRS) is new to most consumers of crime statistics. The data in this article for violent crime in 2020 (compared to 2019) is based on the NIBRS and the FBI’s prior Summary Reporting System.

There are significant differences between the two data collection methods. Both fall under the FBI’s Uniform Crime Reports (UCR). For a full explanation, see Violent Crime Increases in 2020.

Beginning in 2021, only data from the National Incident Based Reporting System will be used.

As stated, there is also crime data from the US Department of Justice’s Bureau of Justice Statistics (BJS) National Crime Victimization Survey.

The latest data from BJS is from 2019 showing that violent crime has been increasing by 28 percent since 2015. Serious violent crime also increased. 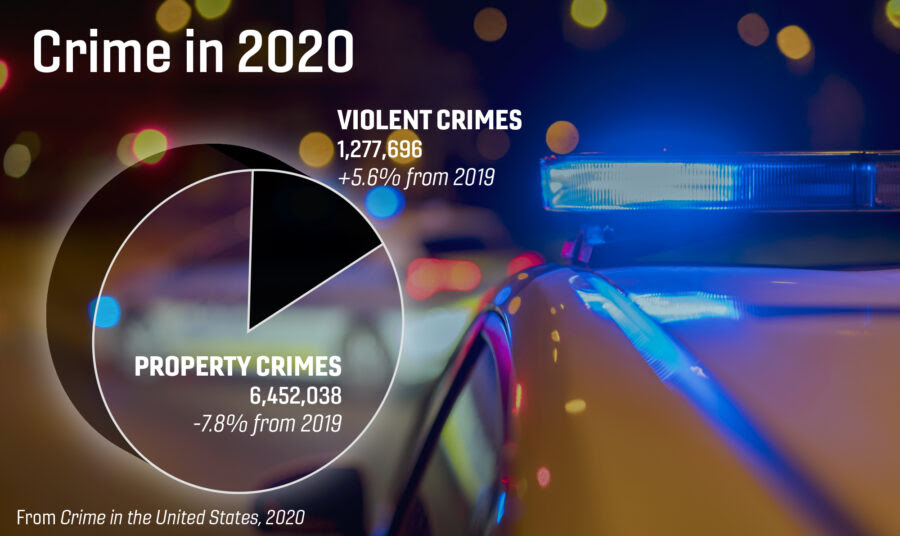 Crime in The United States-2020

It’s not just a matter of the number of police officers leaving, it may be the lack of proactivity of remaining officers that has an impact on growing violence, Big Increase In Police Officers Leaving

Full Report on Crime Rates and Numbers in The United States

I make an attempt to provide everything you need to know about counting crime in the United States at US Crime Rates.

Per FBI preliminary statistics for 2020, there was a 25 percent increase in homicides.

Per the FBI preliminary statistics for 2020, aggravated assaults increased by 10.5 percent, Violent Crime Increases in 2020.

CNN-Final Report From The FBI For 2020

The FBI released its annual Uniform Crime Report for 2020 on Monday, showing that the number of homicides increased nearly 30% from 2019, the largest single-year increase the agency has recorded since it began tracking these crimes in the 1960s.

The report, which is on par with preliminary numbers that were reported over the summer, also shows a 5% increase in violent crime between 2019 and 2020.

According to the report, the number of homicides last year began to escalate during the summer months, peaking in June and July and remaining at high levels after that, CNN.

For the first time in four years, the estimated number of violent crimes in the nation increased when compared with the previous year’s statistics, according to FBI figures.

In 2020, violent crime was up 5.6 percent from the 2019 number. Property crimes dropped 7.8 percent, marking the 18th consecutive year the collective estimates for these offenses declined.

The new 2020 FBI national crime data shows an overall decline in major crimes, while violent crime rates rose (largely bc of aggr. assaults). Homicides also rose during the COVID-19 pandemic—most likely due to its its destabilizing impact. https://t.co/mG3kpIYlyz

These and additional data are presented in the 2020 edition of the FBI’s annual report Crime in the United States.

The UCR Program collects information on crimes reported by law enforcement agencies regarding the violent crimes of murder and nonnegligent manslaughter, rape, robbery, and aggravated assault, as well as the property crimes of burglary, larceny-theft, motor vehicle theft, and arson.
(The FBI classifies arson as a property crime but does not estimate arson data because of variations in the level of participation by the reporting agencies. Consequently, arson data is not included in the property crime estimate.)
The program also collects arrest data for the offenses listed above and 20 offenses that include all other crimes except traffic violations.

Of the 18,619 federal, state, county, city, university and college, and tribal agencies eligible to participate in the UCR Program, 15,897 agencies submitted data in 2020. A high-level summary of the statistics submitted, as well as estimates for those agencies that did not report, follows:

The downloadable files of Crime in the United States, 2020, are available on the UCR’s Crime Data Explorer.

As of this writing, we have statistics from the FBI for 2020 and the Bureau of Justice Statistics National Crime Victimization Survey for 2019.  We do not have data from official sources for 2021. However, all indications from news reports indicate a growing problem with homicides and other forms of violent crime.

CNN: So far, 2021 is on pace to be the worst year for gun violence in decades, surpassing even the high levels last year.

Thanks to a year of attacks on cops, police academies face difficulties attracting recruits