Most acts of violence (including rape) are not reported to the police.

Not reporting victimization is a shared, common experience among many if not most Americans.

A question offered by a friend in response to the Kavanaugh hearings and the fact that Christine Blasey Ford did not report her assault in the early 1980’s, “Do you realize that rape and sexual assaults are the most underreported violent crime?”

My response? “Yes. Correct. It’s terrible. But do you understand that the majority of violent crimes are not reported?”

The context of crime reporting needs some explanation. Why the Lack of Reporting?

There are dozens of recent stories as to why women victims did not report their crimes, New York Times. Calls to sexual abuse centers are up dramatically.

The context is that many men and women encounter circumstances where people we know assault us and we decline to report or prosecute.

My days as a teenager had moments when I was assaulted; it was a common experience for many of us. We never thought to call the police. Regardless as to how painful or embarrassing the experience was, it was a private matter.

Yes, these were traumatic events that had detrimental effects. Yes, I remember them well. Yes, I knew the people who assaulted me at the time. No, I could not name anyone involved today.

During my days as a cop, I encountered domestic violence situations where the victim, almost always a female, refused to cooperate when it was obvious that she had been assaulted. When we went to arrest the offender, it was not uncommon for the victim to object.

I witnessed a vicious assault in Baltimore where a person said the wrong thing to the wrong people and ended getting punched and kicked multiple times. I notified the police. The victim refused to cooperate.

Throughout the years, I spoke to a wide variety of female loved ones and friends who told me that they were touched, grabbed and assaulted, generally by someone they knew, but the police were never called. The conclusion? Not reporting violent victimization for both men and women is common. Note that historically, men had higher rates of victimization (not the case recently) thus one can assume that, based on the data, there are more unreported acts of violence for males.

How the Media Encourages — and Sustains — Political Warfare

How the Media Encourages — and Sustains — Political Warfare … if you passively consume the news, swinging along with headlines as the midterms unfold, political divisions will likely be further cemented. However, if you become aware of how the media reports you’re consuming seek to subtly position and influence you, you’ll likely seek out more sources and become more deliberative. You might notice what’s missing from a debate, and what really might be motivating the outlet.

To avoid getting sucked into a dynamic of two opposing, gridlocked forces, it’s important for all readers to make their consciousness a matter of conscience, Neiman Lab.

I do not have a clue whether Supreme Court nominee Brett Kavanaugh sexually assaulted Christine Ford or the validity of the two other accusers. It’s not the purpose of this article to take sides or to prove or disprove anything.

I simply know that assault and sexual assault are common experiences for men and women, especially in their youth (younger people have much higher rates of violence).

For me, the larger issue is not Brett Kavanaugh, but the shared experience of many of us as to violent victimization.

Detractors will firmly state that rape and/or sexual assault does not equal a fight between two boys in their teens.

But if you look at the data on suicides, self-esteem, drug use, criminality, and personal dysfunction, it’s clear that most were the victims of violence or quasi-violence like bullying.

We don’t report our victimizations because it’s seen as a private matter or we don’t want the offenders punished by the justice system or peers intervene or we are too afraid to report.

Not reporting victimization is a shared, common experience among many if not most Americans.

The NCVS allows for examination of crimes reported and not reported to police. Victims may not report the victimization for a variety of reasons, including fear of reprisal or getting the offender in trouble, believing that police would not or could not do anything to help, and believing the crime to be a personal issue or too trivial to report.

Police notification can come from the victim, a third party (including witnesses, other victims, household members, or other officials, such as school officials or workplace managers), or police at the scene of the incident. Police notification may occur during or immediately following a criminal incident or at a later date.

The percentage of violent and serious violent victimizations reported to police was generally stable over the 23 years from 1993 to 2015. 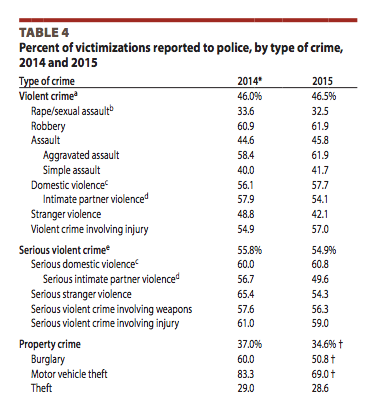