By now, everyone is well aware of Joe Biden’s meltdown in a Detroit auto plant last week, where he got into it with one of the auto workers. Well now the auto worker, Jerry Wayne has responded.

In a tweet of a video posted by the National Rifle Association, Wayne goes back after Biden in a hilarious response to the confrontation at the auto plant. Wayne was shooting an AR-15 in the video with the words, “You’re Full of Shit- Joe Biden” etched on the side.

Joe Biden threatened to take this union worker’s “AR-14” in a train wreck of a viral video.

That union worker’s name is @JerryWayneAR14 and one day after the interaction, he went out and got an “AR-14” in honor of Joe.

This is his message to America: pic.twitter.com/faRuE2OVR2

“My name is Jerry Wayne. And all I wanted to do is ask a presidential candidate a question. I didn’t intend to start a fight. All I did was ask Joe how he was going to win over the union vote when he’s planning on coming after our guns with Beto O’Rourke.”

“I watched a video where he wanted to make ‘assault weapons’, America’s most popular rifle illegal. So I asked him about it. And instead of answering me honestly, he acted like he never said it at all.” The video then goes to the confrontation between Wayne and Biden for a moment.

“And you say I’m full of shit? Really Joe? All I did was ask you about your own comments. At one point you asked me if I wanted to go outside. Why Joe? To smell all the freedom?

Then I ended up telling him, ‘You work for me.’ And then he went and told me no. Politicians that have been in office for as long as Joe Biden need to be reminded that they work for us.”

“We do not work for them. Americans should be able to ask candidates seeking the highest office what’s going to happen to their rights.

If they vote them into office, Joe Biden can call me all the names he wants. But it doesn’t change the fact that he’s on video promising that Beto O’Rourke is gonna lead the effort on gun confiscation.”

“I think Biden made a huge miscalculation when he threatened to strip us Americans of our gun rights. The Second Amendment was put in place to protect us against a tyrannical government.

I have a message for the gun grabbing politicians. Your belligerent behavior has no place in government.”

“And you will never, I mean never, touch our guns.”

“Why is it that the people who want to take away our guns know absolutely nothing about them? They can take away our ‘AR-14’, our ‘AR-16’, and all of our ‘100 round magazine clips’ because ‘they don’t exist.’”

“I am sick and tired of having to defend the fact that we need guns to defend our homes and hunt wildlife. I don’t need an excuse to have 100 rounds. I’ve got the Constitution of the United States. My goal is to actually bring this country together, not further divide us.”

“Many brave men, like my grandfather, who is a 96-year-old World War II veteran fought so that we could have these rights, not so politicians could stomp all over them. For every gun-grabbing politician out there, I’ve got four words for you. ‘DON’T TREAD ON US!’”

“I’m calling on all patriots to stand up to career politicians who have forgotten who they work for, and whose rights they swore to protect. We are in a different era now.

Challenging this opposition is not the way to win this battle, but rather opening our arms to the misinformed. We will win this battle not by belittlement, but by education.”

“My name is Jerry Wayne and I am a proud member of the National Rifle Association.”

During an August 2019 interview with Anderson Cooper on CNN, Biden said that he plans to go after guns if those guns are so-called “assault weapons”—you know, the scary looking black ones.

Cooper asked, “So, to gun owners out there who say, well, a Biden administration means they’re going to come for guns?

In response, Biden said, “Bingo. You’re right, if you have an ‘assault weapon.’ The fact of the matter is they should be illegal, period.”

Not sure there Quid Pro Joe but don’t think that’ll play well in places like Michigan, Texas and other states where guns are a big part of the culture.

It is interesting that Uncle Joe Biden picked a state like South Carolina to make a threat to go after gun manufacturers. As a typically “red” state, one can imagine that such rhetoric won’t play too well down there.

When crazy Joe is cast as a “moderate,” it must mean the rest of the Democratic field is way left…which is true. Still, Biden had tried to paint himself as something of a moderate on the issue of gun control.

His campaign’s gun control plan, which was released in October, proposed reinstating the so-called “assault-weapons ban” and universal background checks.

The campaign drew the line at forcing current owners of semi-automatic rifles to turn their guns over to the government, as some of the more loony left candidates have proposed.

Biden has tried to avoid being aggressive in his gun control rhetoric, however has repeatedly called for gun manufacturers to maintain liability when the weapons they produce is used in the commission of a crime. You know, like car manufacturers are liable when their products are used by drunk drivers—oh, never mind.

“A guy has 12 assault weapons with bump stocks, which means you can fire it faster. You can pull the trigger faster,” Biden said last month during a CNN town hall, in reference to the Las Vegas terrorist shooting.

Biden has ramped up the criticism of Bernie Sanders as he has somehow risen in the polls, in particular Crazy Bernie’s early career record on gun control.

Biden pointed out that Sanders was endorsed by the NRA in his 1990 congressional race, and he voted against gun control legislation a number of times when he was a young House member.

“You know, committed Republicans—and some Democrats—like Bernie Sanders—voted five times, five times against background checks and waiting periods; notwithstanding the fact that millions of people were denied having access to weapons of destruction because they didn’t qualify.”

Is it us or does Biden stutter a lot?

Twice, once in 1991 and again in 1993, Sanders voted against a version of the Brady Bill that would have enacted mandatory waiting period for background checks.

He also voted for a bill in 2003 and 2005 that protects gun companies from lawsuits if their weapons are used in the commission of a crime.

However, since 2016, Sanders has expressed a need to expand background checks and ban assault weapons.

“You know, any one of you and the people behind me should be able to walk into a court of law and demand that gun manufacturers with their enormous profits be held accountable for the carnage that they’re responsible for inflicting on our society.”

Biden’s campaign also released a web video of Sanders telling a radio caller after the 2012 Sandy Hook shooting that allowing people to sue gun manufacturers would do no good.

Biden likened the liability aspect of gun companies to that of big tobacco.

“Imagine if I stood up here and said…I’m going to vote to give immunity to tobacco companies, to drug manufacturers who poured nine billion opioids on the market,” Biden continued.

Biden also took to social media to attack Sanders’ record on guns, suggesting that Crazy Bernie is partially responsible for the power gun manufacturers currently have.

I promise you that if I am elected president, we will hold gun manufacturers accountable for the carnage they have caused. 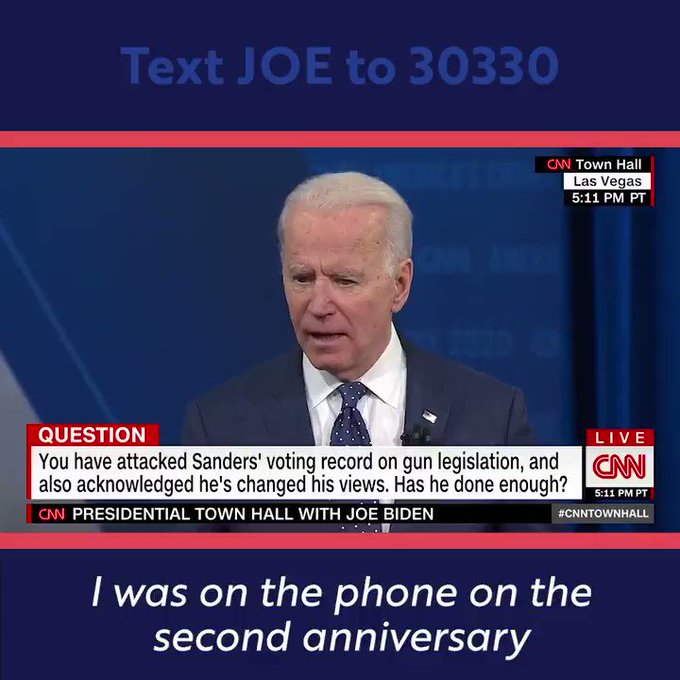 Biden also noted that if elected (chances slim and none), on his first day in office he would send a bill to Congress repealing the liability protection for gun manufacturers, closing background check loopholes and enacting a waiting period.

As we reported a few weeks ago, Biden’s statements defy logic.

Breaking it down “by the numbers,” so to speak, let’s once again look at how wrong this plan is:

-Criminals can’t buy guns legally, thankfully, but must buy them out of a trunk of a car in an alley somewhere. Gun manufacturers have no control over a stolen gun being sold in an alley.

-Criminals don’t generally attend gun range safety classes, marksmanship courses, or concealed carry classes, all of which strongly establish and support the lawful and safe use of weapons and are fully supported by all gun manufacturers and gun rights advocates. Gun manufacturers have no control over criminals not taking classes on legal use and gun safety.

-Criminals don’t follow the law – whatever law it is that they’re breaking. Hence, the label – criminal.  They’re committing a crime, which is direct contradiction with everything espoused by gun manufacturers and gun rights advocates.  Gun manufacturers have no control over people breaking the law.

-Some people use gasoline to start fires with. Some people use hairspray and a disposable lighter to make a mini-flamethrower to kill a spider in their house.  People pump gasoline into plastic milk containers.

None of these things are supported by common sense or the intended use as prescribed by the gasoline manufacturer, hairspray manufacturer, or the local dairy.  People CHOOSE to do stupid and sometimes unlawful things with products and devices that their manufacturers surely didn’t intend.

One of our writers, James Lewis wrote the following:

“My folks didn’t sue White Rain hairspray when I burnt down our tool shed when I was 12 by using mom’s hairspray and her cigarette lighter to kill a group of daddy longlegs spiders…with my concocted mini-flamethrower.”

“Can you imagine how ridiculous and frivolous that lawsuit would have been?  Your kid was using hairspray and a lighter to kill spiders and burnt down a building!”

“Neither the hairspray manufacturer nor the lighter manufacturer intended for their product to be used that way.”

“Since it was 44 years ago and the statute of limitations has expired, I felt it possible to confess my crime without fear of punishment.  A lawsuit based on that act is just as ridiculous as a robbery, murder, or assault committed by a criminal with a stolen gun.  The gun manufacturer simply isn’t responsible for what someone chooses to do with the weapon.”

This isn’t about “proper use” of a product or lawsuits – this is about CONTROL.