I just wrote about the decrease in police officer deaths. Some commentators suggested that better medical care resulted in fewer deaths.

A former police spokesperson suggested that I take a look at the number of police officers assaulted. I did and there is a dramatic increase in the numbers from 2014 through 2016 that corresponds to harsh media coverage.

Note that the number of police agencies reporting (and the number of officers employed) increased in 2015 and 2016 which could influence the data.

Is there An Explanation?

There has been considerable negative media coverage of animosity between law enforcement and some communities and an intense national debate regarding police use of force that corresponds with the increase in assaults.

Violent crime and homicides rose in most American cities, with some suggesting that officers were unwilling to engage in proactive policing that resulted in fewer arrests.

Some cops throughout the country fervently believe that there is a cultural and physical war on policing and the increase in the numbers of officers assaulted and injured are indications that they could be correct. There are also numerous media reports of increasing assaults on correctional officers.

The decrease in deaths was hailed by some as proof that there was “no war on cops,” (The Marshall Project). The increase in assaults and injuries of officers may reignite the debate. Some police observers insist that better trauma care resulted in fewer deaths while others suggest that officers were facing increased violent attacks.

But as noted, there are more agencies and officers participating in the count, and the averages for 2016 are not dramatically higher than the cumulative norms for the entire measurement period.

But the negative publicity from the last three years is creating increasing problems for police officer retention and recruitment and causing many police officer families to strongly encourage their loved ones to get out of policing, and to get out now.

Noting that 57,180 officers were assaulted in 2016 and that close to 29 percent were injured provides fuel for that discussion.

Data from the FBI 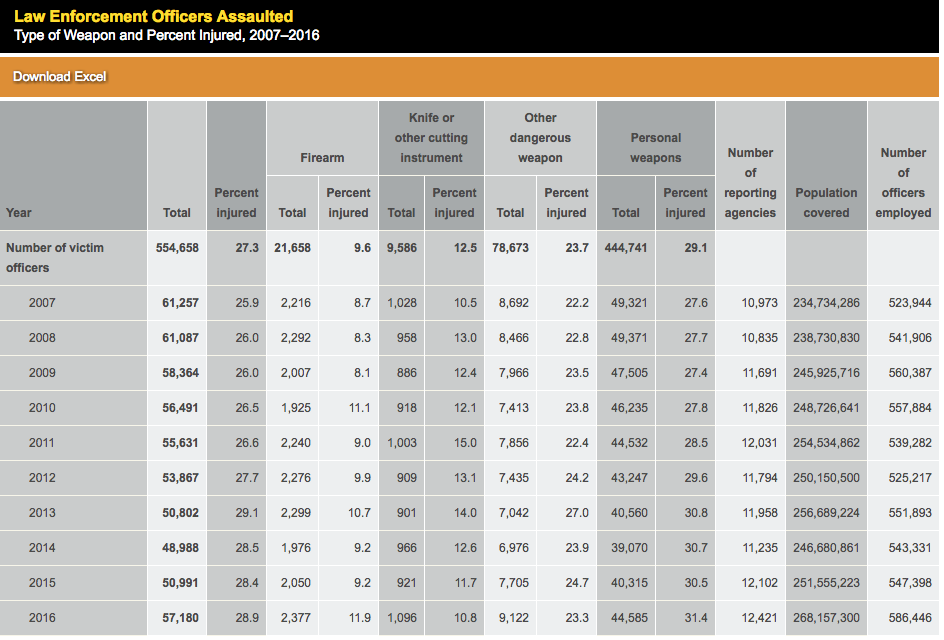